Print me a Stradivarius

How a new manufacturing technology will change the world 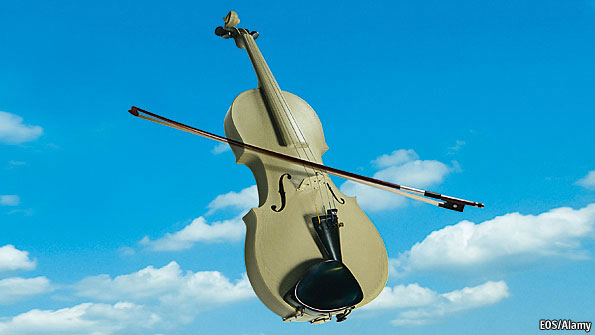 THE industrial revolution of the late 18th century made possible the mass production of goods, thereby creating economies of scale which changed the economy—and society—in ways that nobody could have imagined at the time. Now a new manufacturing technology has emerged which does the opposite. Three-dimensional printing makes it as cheap to create single items as it is to produce thousands and thus undermines economies of scale. It may have as profound an impact on the world as the coming of the factory did.

It works like this. First you call up a blueprint on your computer screen and tinker with its shape and colour where necessary. Then you press print. A machine nearby whirrs into life and builds up the object gradually, either by depositing material from a nozzle, or by selectively solidifying a thin layer of plastic or metal dust using tiny drops of glue or a tightly focused beam. Products are thus built up by progressively adding material, one layer at a time: hence the technology’s other name, additive manufacturing. Eventually the object in question—a spare part for your car, a lampshade, a violin—pops out. The beauty of the technology is that it does not need to happen in a factory. Small items can be made by a machine like a desktop printer, in the corner of an office, a shop or even a house; big items—bicycle frames, panels for cars, aircraft parts—need a larger machine, and a bit more space.

At the moment the process is possible only with certain materials (plastics, resins and metals) and with a precision of around a tenth of a millimetre. As with computing in the late 1970s, it is currently the preserve of hobbyists and workers in a few academic and industrial niches. But like computing before it, 3D printing is spreading fast as the technology improves and costs fall. A basic 3D printer, also known as a fabricator or “fabber”, now costs less than a laser printer did in 1985.

The additive approach to manufacturing has several big advantages over the conventional one. It cuts costs by getting rid of production lines. It reduces waste enormously, requiring as little as one-tenth of the amount of material. It allows the creation of parts in shapes that conventional techniques cannot achieve, resulting in new, much more efficient designs in aircraft wings or heat exchangers, for example. It enables the production of a single item quickly and cheaply—and then another one after the design has been refined.

For many years 3D printers were used in this way for prototyping, mainly in the aerospace, medical and automotive industries. Once a design was finalised, a production line would be set up and parts would be manufactured and assembled using conventional methods. But 3D printing has now improved to the point that it is starting to be used to produce the finished items themselves (see article). It is already competitive with plastic injection-moulding for runs of around 1,000 items, and this figure will rise as the technology matures. And because each item is created individually, rather than from a single mould, each can be made slightly differently at almost no extra cost. Mass production could, in short, give way to mass customisation for all kinds of products, from shoes to spectacles to kitchenware.

By reducing the barriers to entry for manufacturing, 3D printing should also promote innovation. If you can design a shape on a computer, you can turn it into an object. You can print a dozen, see if there is a market for them, and print 50 more if there is, modifying the design using feedback from early users. This will be a boon to inventors and start-ups, because trying out new products will become less risky and expensive. And just as open-source programmers collaborate by sharing software code, engineers are already starting to collaborate on open-source designs for objects and hardware.

A technological change so profound will reset the economics of manufacturing. Some believe it will decentralise the business completely, reversing the urbanisation that accompanies industrialisation. There will be no need for factories, goes the logic, when every village has a fabricator that can produce items when needed. Up to a point, perhaps. But the economic and social benefits of cities (see article) go far beyond their ability to attract workers to man assembly lines.

Others maintain that, by reducing the need for factory workers, 3D printing will undermine the advantage of low-cost, low-wage countries and thus repatriate manufacturing capacity to the rich world. It might; but Asian manufacturers are just as well placed as anyone else to adopt the technology. And even if 3D printing does bring manufacturing back to developed countries, it may not create many jobs, since it is less labour-intensive than standard manufacturing.

The technology will have implications not just for the distribution of capital and jobs, but also for intellectual-property (IP) rules. When objects can be described in a digital file, they become much easier to copy and distribute—and, of course, to pirate. Just ask the music industry. When the blueprints for a new toy, or a designer shoe, escape onto the internet, the chances that the owner of the IP will lose out are greater.

There are sure to be calls for restrictions on the use of 3D printers, and lawsuits about how existing IP laws should be applied. As with open-source software, new non-commercial models will emerge. It is unclear whether 3D printing requires existing rules to be tightened (which could hamper innovation) or loosened (which could encourage piracy). The lawyers are, no doubt, rubbing their hands.

Just as nobody could have predicted the impact of the steam engine in 1750—or the printing press in 1450, or the transistor in 1950—it is impossible to foresee the long-term impact of 3D printing. But the technology is coming, and it is likely to disrupt every field it touches. Companies, regulators and entrepreneurs should start thinking about it now. One thing, at least, seems clear: although 3D printing will create winners and losers in the short term, in the long run it will expand the realm of industry—and imagination.